You can't turn on the news these days without hearing about "flu" of one sort or another. Swine flu, avian flu, dog flu.......it makes the head swim! Here is a brief synopsis of the significance of influenza to your pet. I have no flu pictures, so I decided to belatedly post some halloween pictures instead! 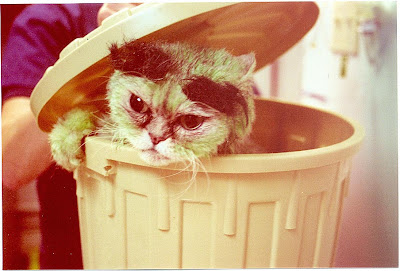 This is my very favorite Halloween costume ever- our beloved "Grouch" who passed away last December dressed as him namesake, Oscar the Grouch. You have to admit there is a distinct resemblance! (note: green Kool Aid does NOT come out of the fur. For a very long time).

Back to the flu. Type A influenza viruses can affect many different species. In GENERAL, influenza virus is species specific- that is, dog flu affects only dogs, not humans. However, type A influenza viruses are known to mutate and cross species, which is why a while back we had a big concern about avian (bird) flu and this year's hot topic is swine flu. In the case of canine influenza (H3N8), it is thought to have mutated from the equine flu virus. Canine flu first showed up about five years ago in groups of racing greyhounds. It is common practice to feed these dogs raw horsemeat and it is thought that that may have been a factor in the virus jumping species (just one of many reasons we do NOT recommend feeding raw meat). The outbreaks at greyhound tracks have occurred in clusters and seem to have a higher incidence of severe disease than the cases we see in the general canine population. The largest number of cases have occurred in Florida, New York, New Jersey, Pennsylvania, and Colorado, but cases have been reported in more than 30 states including Ohio and Kentucky. 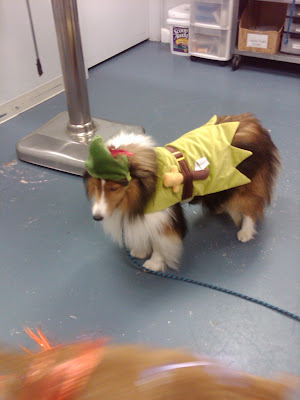 Here is Cory's costume for this year- Peter Pan, which seemed appropriate! Unfortunately I forgot my camera and had to make due with my cellphone, so the quality is not the best!

Because canine influenza is a relatively new virus, very few dogs will have any natural immunity and the morbidity (rate of infection) may approach 100%. Approximately 20% of dogs affected will show no clinical signs, but will be contagious to other dogs. The vast majority of dogs will show mild symptoms similar to "kennel cough" syndrome- initially sneezing and nasal discharge followed by a cough which is characteristically a softer cough than the "goose honk" we hear with kennel cough. Fever may be present (rarely seen with kennel cough). A small percentage of dogs may develop the severe form of the disease which presents as rapid progression to severe, often hemorrhagic pneumonia. Racing greyhounds seem to be much more likely to develop the severe form. Less than 1% of dogs who are exposed will die of the disease. Dogs may be contagious BEFORE developing symptoms, which can make controlling spread of disease difficult. 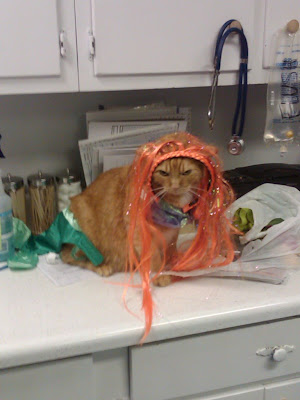 Stevie, our clinic cat, dressed as "The Little Mermaid" this year. His costume is a little difficult to appreciate (sadly the bikini top and tail are hard to see!) but the expression on his face says it all!

Last spring a vaccine for canine influenza was given conditional approval. At this time we are not recommending its use for our patients. In general, we try to avoid using new products such as this the first year it is available, particularly when it does not have full approval as is the case with this vaccine. Locally canine influenza does not appear to yet be presenting a significant threat. In addition, it is important to know that this vaccine does NOT prevent your dog from developing symptoms; it decreases the severity of the symptoms and lessens the length of time the vaccinated dog is contagious to other dogs.

At this time, canine influenza does not appear to pose a significant health threat to our patients as the overall incidence in our area is low, and the vast majority of dogs who do become sick will have relatively mild symptoms. It is important to keep in mind however that some dogs do develop more serious symptoms; our recommendations for vaccination may change if the disease becomes more prevalent. It is likely that dogs who are most at risk would be dogs who attend dog shows and training classes, stay at boarding kennels, or go to the groomer or dog park. If more cases of canine influenza begin appearing, our recommendations for these dogs may change. 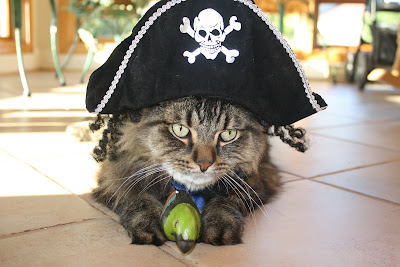 This is Boris Wedig, one of our patients who sends us pictures of his Halloween finery each year. Boris and Stevie seem to share a similar opinion of dressing up...they think it is more trick than treat!

Canine flu has not been reported in people and is not considered a health risk to humans. However, in the news last week it was reported that a cat had been diagnosed with swine flu (H1N1) which it appeared to have contracted from its human owners. This appears to have been another case of a type A influenza virus jumping species. Also within the past few weeks there have been a handful of cases of H1N1 reported in pet ferrets. Ferrets in general are more susceptible to the influenza viruses than dogs and cats, and so it is not totally surprising that this could occur. At this time, it is not believed that cats or ferrets (or other household pets) will harbor the swine flu virus and serve as a source of infection to humans- it actually appears that the opposite was true and the humans transmitted the disease to the animals.

Based on our knowledge of influenza viruses, it is wise that if you are experiencing symptoms of flu that you avoid close contact not only with human family members but with your pets as well (no sleeping on the bed!) and wash your hands frequently. The same holds true if your pets are the ones with symptoms. The risk of transferring infections is very, very low, but not nonexistent. Also, it is more important now than ever that if your dog develops respiratory symptoms such as sneezing or coughing that you see your veterinarian to ensure that any evidence of severe disease is caught as early as possible. Our diagnostic lab is now offering a panel which tests for the eight most common causes of canine upper respiratory disease. This panel is not inexpensive and is not something we would necessarily recommend for every dog with symptoms, but for dogs with more serious evidence of disease or who may serve as a source of infection for large numbers of other dogs it may be a valuable source of information. 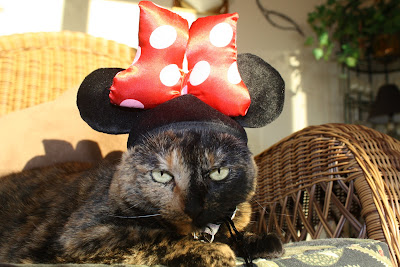 Natasha Wedig, Boris' "sister" in her Minnie Mouse outfit. She doesn't look any happier than Boris and Stevie!

So follow the common sense advice above, be vigilant and observe your pets closely for respiratory symptoms, and stay tuned for new developments. We hope both you and your pets stay healthy and happy this flu season!
Posted by Sheltiedoc at 4:26 PM 1 comment: