Thunderstorms and fireworks and phobias...Oh my! 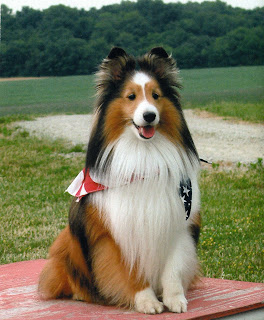 The Fourth of July is upon us and the phone calls started at the end of last week.  The endless fireworks season has started, and to top it off we've also had fairly severe thunderstorms (sadly, with lots of noise but little rain or cooling effect) for the last several days.  Many dogs are afraid of loud noises, with thunder and fireworks topping the list, so it's a tough season for them.  These phobias tend to worsen with age, although at some point many dogs become deaf enough that they sleep through them so the problem is somewhat alleviated.  The severity of the problem can vary widely, with the mildly affected dogs simply panting, pacing, and acting stressed, all the way to the far end of the spectrum to dogs who panic and destroy things, often in an attempt to escape and run.  (This is also the worst time of the year for lost dogs, as many dogs panic from the noise while outside in the yard and take off, not always able to find their way home, so be sure and take appropriate precautions).

If you are just now calling us about your dog's problem, our options are much more limited- for dogs with serious phobias, most of the medications we use take at least three weeks to reach full effect and the dogs need to be started at the beginning of the season and kept on them until the end.  However, there are some things we can do.  One of our first recommendations is often melatonin.  Melatonin is available over the counter and is often sold as a sleep aid.  It is a naturally occurring hormone that helps the body regulate cycles which fluctuate with season or time of day.  It is generally a very safe drug with few side effects, although I always caution my clients with breeding animals that it may have some effect on reproductive processes.  In animals, it often has some anti-anxiety effects as well as helping them to sleep better, so we use it for mild phobias as well as older dogs whose cognitive function may be declining.  It also does not require a prolonged time to "build up" to effect.

Another very safe, benign product which can be helpful is a DAP collar or diffuser.  DAP stands for Dog Appeasing Pheromone, and is supposed to mimic the chemicals secreted by a bitch when she nurses her puppies.  It is available in either a collar form or a diffuser which is plugged in like an air freshener.  I have used the collars with some success on my own dog, when he developed a fear of bottle rockets shortly after his companion died.  He had been raised with fireworks from the stadium and riverfront going on practically in my backyard, and had no issues until he was about four years old.  We went to an out of town trial, one of the first ones where he was the "only dog" after his father died, and there were a number of bottle rockets being set off outside the hotel.  He seemed only mildly worried there and asked to go back inside, but the next year was terrified of them and did a running pace around and around the house until well after they had stopped.  He could not be distracted or stopped without physically restraining him.  The DAP collar helped quite a bit, and the next year, I did not have to use it and so far have not needed it this year.  (I think also having another dog in the house again has helped him).  Interestingly, he is not bothered by gunshots, and will bark at the loudest thunder but doesn't show the same signs of distress- it's those darn little pops of the bottle rockets.  The DAP products can be ordered online and do not require a prescription.

Some people swear by "Thundershirts" or anxiety wraps, which are tight fitting jackets the dog wears during the storm.  I have not tried them myself, but know several people who have used them with success.  They are not totally without a basis in science, as this is a therapy used in soothing autistic children.

Counter conditioning, or pairing the noise with a positive stimulus such as a treat, can also be successful.  Many tapes are available to start with the sounds at a low level and work up to full volume if you find your pet is not interested in food during an actual storm or fireworks display.

Finally, medical therapy may be indicated for some pets with severe phobias.  This generally is appropriately done with a full physical to rule out any contraindications for the medication, as well as a consult with your veterinarian to help develop a behavior modification plan to use along with the medication.  As I stated above, most of the medication needs to be started well in advance of the season, though we do have a few options for quicker acting anti-anxiety drugs to use short term for severe cases.  In most cases, I don't like to use tranquilizers as they don't alleviate the fear at all, just make the animal incapable of reacting- which in some cases will make the phobias worsen more quickly.

I did just recall that I did a similar post a couple of years ago, so if your dog is having problems you may want to look in the index to the right under fireworks and check out that post as well.  Happy Fourth to all!  (and thanks to my friend Joann Jozwiak for the photo above of my beloved Andy at our favorite place, my friend Maryann's farm).
Posted by Sheltiedoc at 3:17 PM 1 comment: