Crazy things we do for our dogs...

Last summer Cory ruptured an eardrum (usually you see this after chronic ear infections, but Levi, Andy, and now Cory all as older dogs had ear drum ruptures with no history of previous or ongoing ear infections and no/minimal signs directly related to the ears- just were "not right" in training or in Cory's case, not quite eating normally and had ruled out all kinds of other issues.  I was looking for something that could cause ongoing nausea that would make him not want to eat and that was when I found the ruptured ear drum).  I treated it, it appeared to heal and the problem that had led me to find it (appetite a little off) resolved.  However, this fall I started to suspect that his hearing was starting to deteriorate.  He had reached what I call the "age of entitlement" (he turned 10 in December) where sometimes their response to previously known cues gets a little lax, and so at first I had attributed what I was seeing just to a little old timer slacking off.  But it soon became apparent that he was not hearing in certain situations.  Since he is still vigorous and active and still actively training in multiple venues, I decided to make an appointment to have his hearing tested.  Due to some scheduling issues it was going to be several weeks before I could get him in.  Not long after I scheduled the appointment, it seemed that his hearing took a nose dive and I began to suspect that not only did he have some hearing loss, but that it had progressed to a fairly profound level.

Today I took Cory to the FETCH lab at the University of Cincinnati (Facility for the Education and Testing of Canine Hearing) for a hearing test.  The test that is done (ABR or BAER test) is the same test used to evaluate hearing in newborns.  It involves applying a topical anesthetic cream (I told Cory I'd always known he was a numbskull already!), placing three electrodes by inserting tiny wires under the skin by each ear and on top of the head, and placing a soft earpiece that emits a series of clicks into the ear canal.  The electrodes measure the brainstem response to the sounds and give an evaluation of the dog's hearing capabilities.  Typically these tests are done in breeding stock or to evaluate young puppies before placement in breeds that have a high incidence of congential deafness such as Dalmations.  The test is not painful and usually can be done without anesthesia;  all that is required is that the dog hold reasonably still and tolerate the material in the ear canal. 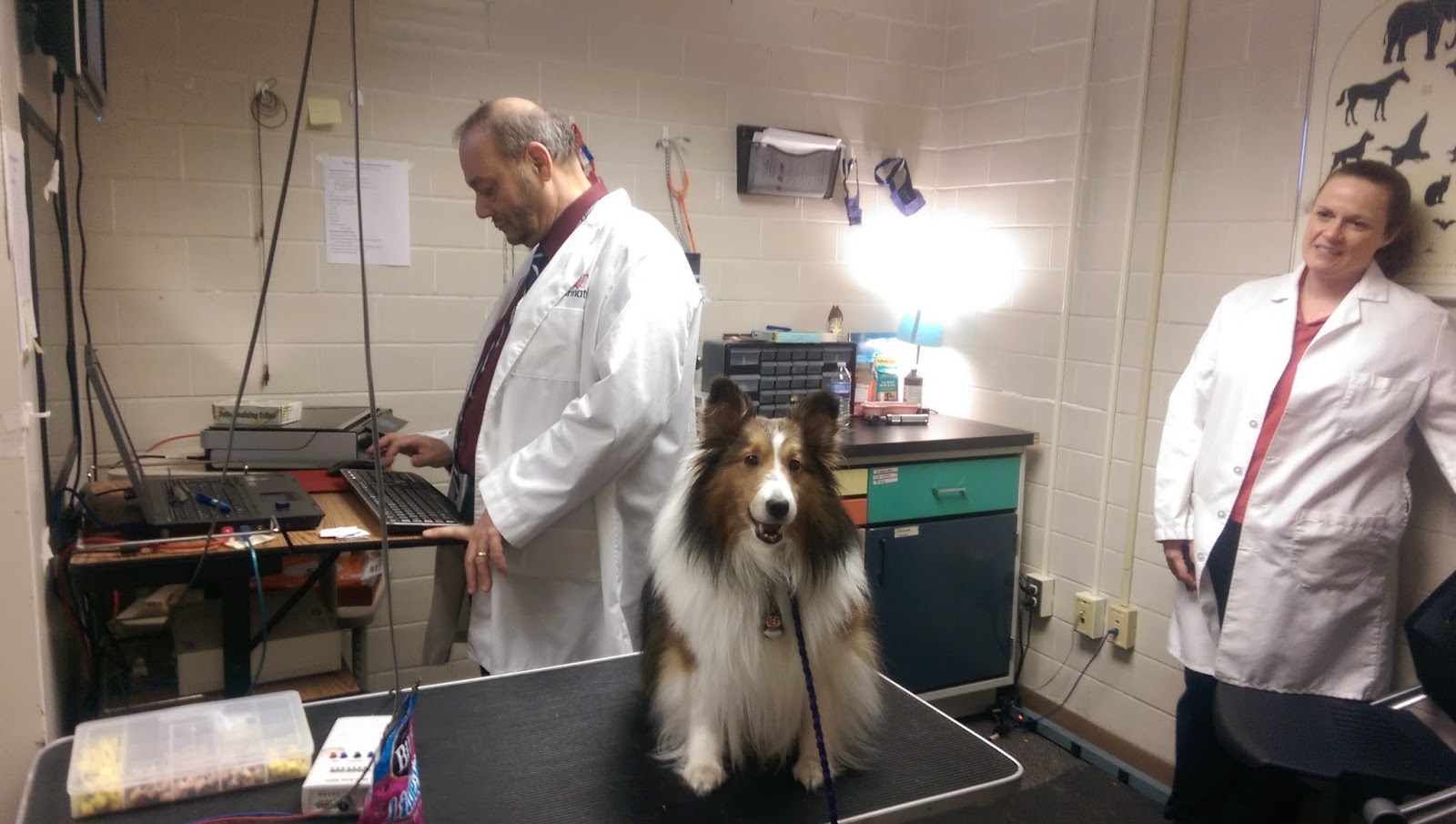 Cory tolerated the procedure well- he thought it was kind of a stupid way to earn cookies, and he was a little startled at first by some of the clicks, but overall figured that having the undivided attention of 3-4 people and cookies too was worth holding still for.  Unfortunately my fears were confirmed;  he has severe hearing loss in the right ear (the one that had the ruptured ear drum) and moderate to severe loss in the left.  It is likely that most of the impairment is aging related, although probably the issue with the ear drum did not help and may have contributed.  It's very typical for me to start to see hearing loss in my patients around 11 years old, so he was in the right age range although at the younger end.  However, I also think we tend to pick up on these things sooner in our competition dogs as most dogs can compensate so well around the house in familiar surroundings.  It is amazing how attuned they are to visual cues and how little the hearing loss impacts them in most situations.

So, unfortunately there is not much that can be done to return his hearing to normal.  However, as it happens, when I was a vet student one of my professors had done some work with hearing aids in dogs and prior to the visit when I started anticipating that the news might not be good I had done some research to see if anyone was still working with them (Dr. Marshall having long since retired).  As it turned out, the only person currently doing any work with canine hearing aids in the US was the very same Dr. Scheifele with whom we already had the appointment for ABR testing.  And, as it happens, I have pet insurance on Cory so I called prior to the visit to see if a hearing aid would be covered if he was a candidate.  Turns out no one had ever asked that question before, so they told me to apply for pre-approval but that they were cautiously optimistic that it would be covered.

Hearing aids are not widely available in dogs for good reason;  they are not always a terribly practical option.  Teaching the dog to tolerate wearing them is not a simple task, but I am fairly confident that I could do this successfully;  Cory and I have a long training relationship and I had already started to lay some groundwork by conditioning him to tolerate gauze pads in his ear canals for short periods prior to the appointment.  However, an additional issue is that noises don't sound the same through the hearing aids that they did naturally and there is also a learning curve for the dogs from that standpoint as well.

Given the degree of hearing loss in the right ear, only the left ear would be a candidate for an aid.  My main reason for considering it is that Cory is still a vital and active dog,  he is still competing in agility, training in tracking, and finished his UD last spring (thankfully before the hearing loss- I struggled with trying to get his dad's UD after he was already having a lot of hearing issues and as a result never was quite able to get the final leg).  While the hearing aid would not be legal in the AKC ring, it might enable me to help continue to let him play in agility and maybe help me to transition him to running successfully without it.  I have spent a lot of time teaching him to listen to my verbals over my body language since I am so slow, now we have to find a new compromise.  It's also possible that it might be allowed in some of the other organizations that are more disability friendly.  I don't care if we ever Q again, I'd just like for him to continue to be able to play.  In addition, even just in everyday around the house issues his hearing has curtailed some of his freedom because he can't hear me calling him nor can he hear cars, etc.

I am not sure that given the degree of impairment in the "good" ear that pursuing the hearing aid is worthwhile.  I will have to think about it for a bit...my plan is to get some ear plugs, work on conditioning him to wear them and see how readily he accepts them.  I will probably go ahead and file the pre-approval paperwork with Trupanion and see if they will cover it (if not, the answer becomes easy!).  Then I will make a final decision as to whether we will give it a go or not.

Regardless of what I decide, I am a little sad tonight...even though I expected to hear the results we got, it is one step into old age and eventual retirement and then loss of my buddy...I am so sad that we have a finite number of times left to train together.  Until you have trained a dog for literally years to be your partner, it is hard to understand just how different the relationship is from a dog whose function is primarily as a pet.  Cory is my pet and my baby, but he is also my partner and someone I trust and rely on.  He's a link to his father who was my heart dog.  How I wish I had the answer to keeping him forever young! 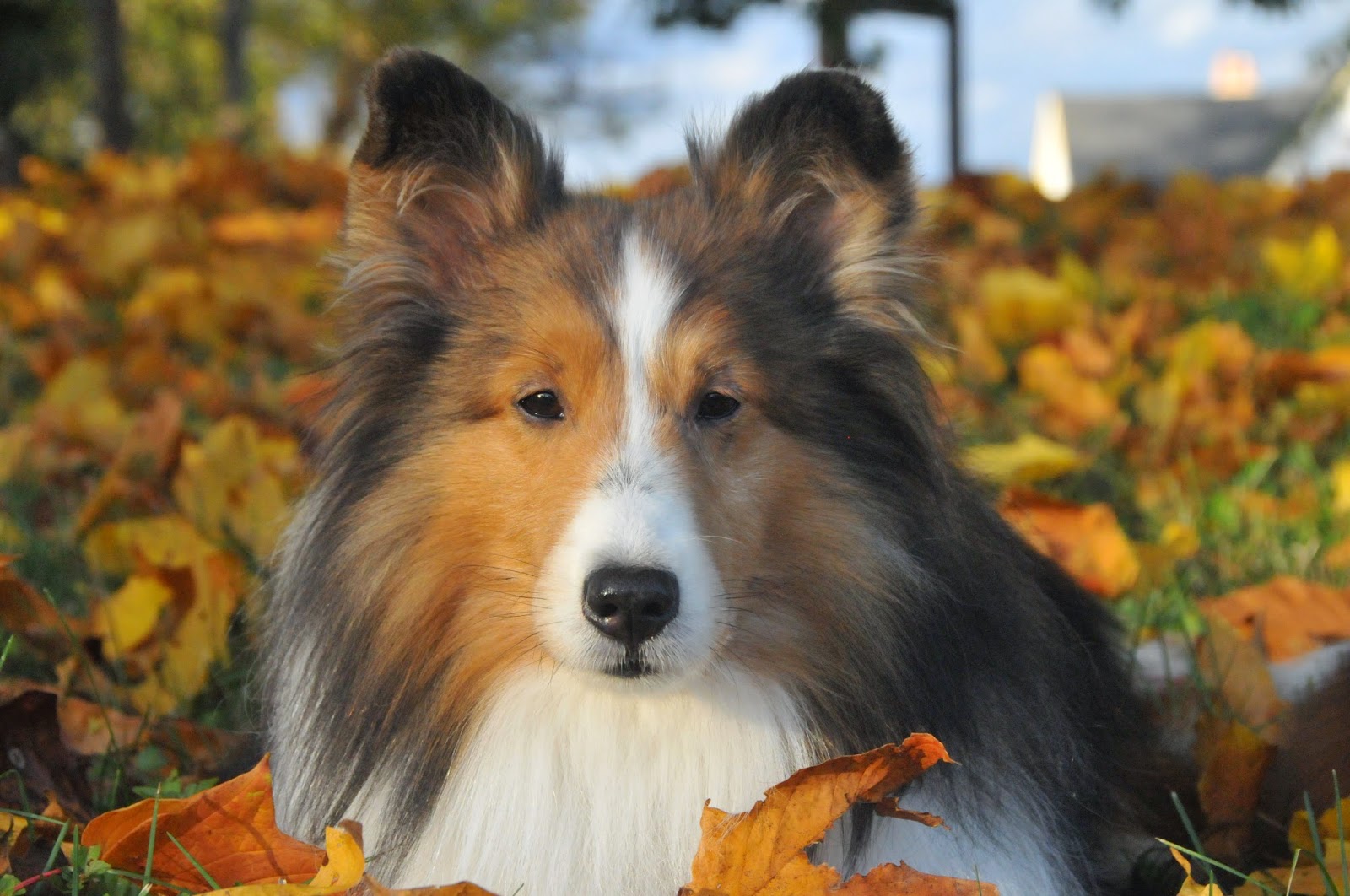 How to give a pill