Well, yesterday my aunt and I had planned to drive Middle Creek Road and look for birds; with the rain it was a very unrewarding trip however. Aside from a fleeting glimpse of what I think were indigo buntings, but could have been bluebirds or blue grosbeak; a northern flicker, and a little green heron we saw nothing. Bummer.

I came home however to a very active feeder and back yard. I had my first summer tanager of the season down in the woods- last year I had two pairs that were daily visitors for several weeks squabbling over territory back in the woods. I had a first of season Eastern Bluebird that I got some very long distance shots of. I see them occasionally in the yard, but can't seem to tempt them up to my feeders. 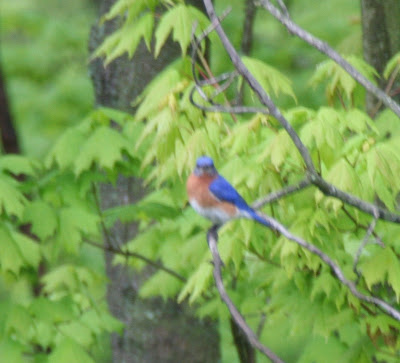 So far I have out black oil sunflower, thistle, cardinal mix (mostly black oil sunflower and safflower), "Nutty Safari" which is a variety of nuts with BO sunflower; suet, peanuts in the shell, banana chips, mealworms (fresh or dehydrated, depending on what I have), oranges, and string for nests. I have used Julie Zickefoose's suet dough but have never had a bluebird come for it and it sure attracts the starlings which usually don't bother me much otherwise. I occasionally put out those bluebird nuggets too. If anyone has any great ideas for attracting the bluebirds and orioles up onto the feeders, I'm all ears.


I also had a Great Crested Flycatcher, a new yard bird for me, who flew up and obligingly sat in easy camera range right on the crook that holds my yard feeders for quite some time. Of course that was BEFORE I went and got my camera out of the car. GRRR! And I think I had a number of pine siskins on my finch feeders; here is a picture. Ebird flagged it as an unusual sighting for this time of year, so any of you more knowledgable birders who want to comment and let me know if my ID is correct I would appreciate it. i have seen them once or twice before in my yard, so not a new bird, but not one i see frequently. 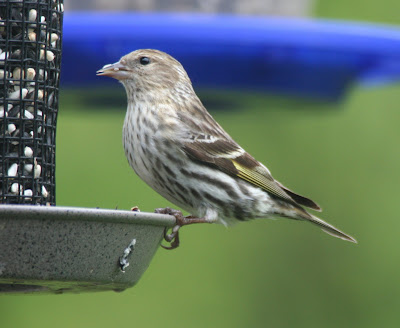 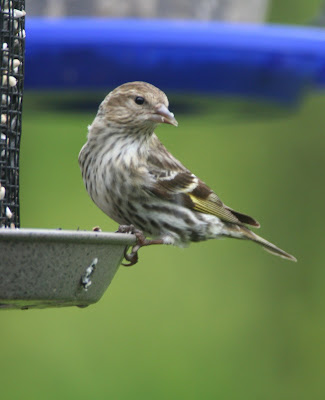 Here're a couple of shots I thought were cute of a mockingbird. Not sure if this was the same one who took up residence a year or so ago from November until early spring and chased all the other birds away, but if it is he's mellowed. I called that one "Mr Wilson" because he was so possessive of "his" yard. We had quite a battle going on where I would chase him off and he would come right back; since I had a job to go to and he didn't, he won. Eventually though, he apparently met a Mrs. Wilson and moved on. This one has been around off and on for a while but doesn't seem to cause problems. 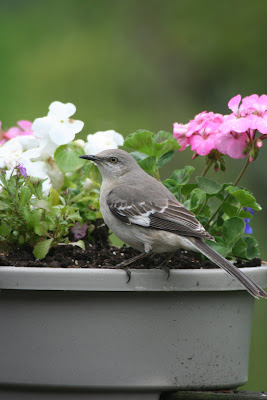 And here's a cute one of the little girl cardinal who along with her boyfriend and another male were quite active in the yard all day. 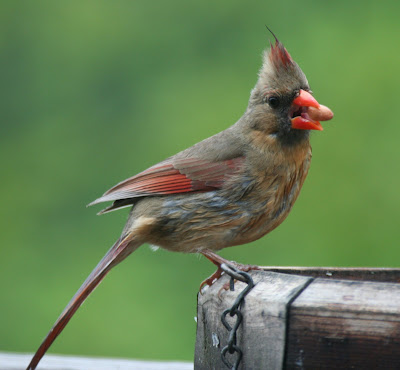 And just to give the mammals equal time, here's the little chipmun who runs up from the woods and helps clean up under the bird feeders. I don't know why he is filed under "cute" in my brain and his relatives the mice in the garage totally creep me out, but there you have it!
One thing I discovered is that I REALLY need a good tripod for these overcast days where I need a slower shutter speed! I didn't get many sharp shots. 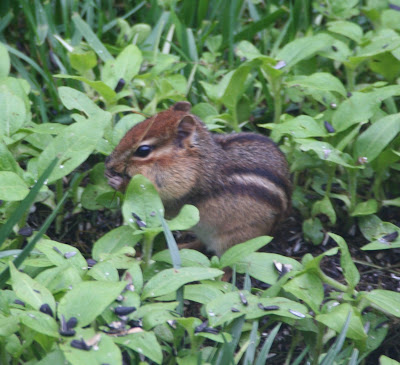 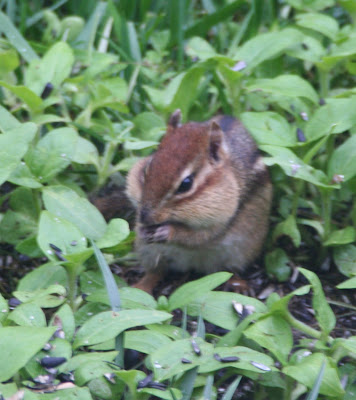